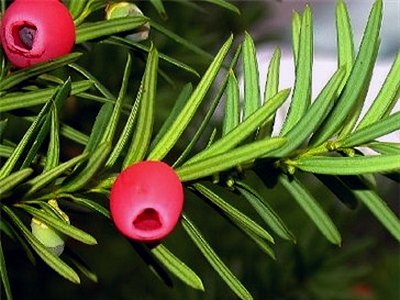 The tree originally known as Yew is Taxus baccata, although now it is frequently called English yew, or European yew. Yew trees can grow to be 30 to 60 feet tall, but some may reach 90 feet. Yew leaves are highly poisonous. A soft, bright red structure that looks like a berry surrounds each Yew seed. Each Yew cone containing a single seed.

Only the red fleshy part of the Yew is not poisonous, and this allows birds to eat it seed and all, then disperse the hard seeds undamaged in their droppings. Yew trees and shrubs require a soil with good drainage. Yews are slow growing and can either be left unpruned, or pruned into a hedge. Yew trees over 2000 years old are not uncommon. Yew tree boughs often hollow with age, making ring counts impossible.

Yew seeds are extremely poisonous, but are eaten by some bird species, like Hawfinches. Yew has been used as a poison for hundreds of years. Yew wood was used to make longbows. The chemotherapy drug Paclitaxel can be derived from the leaves of European Yew, and the bark of the Pacific Yew.

Yew is a common name given to various species of trees, most prominently trees and shrubs in the genus Taxus, including Taxus baccata, or Common Yew, Taxus brevifolia, or Pacific Yew, Taxus canadensis, or Canadian Yew, and Taxus globosa, or Mexican Yew. Yew is also used for any of various plants in the families Taxaceae and Cephalotaxaceae. One of the oldest surviving wooden artifacts is a yew spear head. Yew bark and wood is highly poisonous, and so are the seeds. It is very important to keep small children away from Yew trees.

It may be possible to find any yew farms near your location. We have built a map that will show all of the berry farms in our directory!