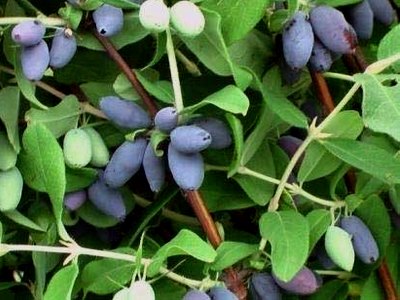 Haskap plants are native to nine Canadian provinces. Russian horticulturists started to breed sweet-tasting Siberian Haskap berry plant varieties in the 1950s. Early-blooming haskap flowers are not affected by late spring snowstorms. In Japan the Haskap is named for the indigenous Ainu people of Hokkaido island where the berries have been enjoyed for centuries. Many blueberry farmers also grow Haskap berries.

Haskap can survive a large range of soil acidity. Haskap grows well as a single bush, or as a row of bushes for a nice hedge. Haskap grows better planted with high organic matter, in well drained soils, and in locations with lots of sunlight. It may take three or four years to produce a good harvest of haskap berries.

Haskap uses include pastries, jams, juice, wine, ice cream, yogurt, sauces, and candies. Haskap is easy to use for ice cream and smoothies, since the berry skins just seem to disintegrate. Haskap can produce a wine similar to grape or cherry wine.

It may be possible to find any haskap farms near your location. We have built a map that will show all of the berry farms in our directory!